Supercritical Fluid Centre (SFC) was established at 2009 in the Faculty of Food Science and Technology. SFC is a collaboration project between Universiti Putra Malaysia (UPM) and Malaysian Biotechnology Corporation (MBC). The objective of the centre is to carry out research in extraction by using green technology, specifically supercritical-carbon dioxide (SC-CO2) as solvent.  Supercritical-carbon dioxide is suitable as extraction solvent due to the toxic effect and it is more environmental friendly than the conventional extraction method.

The unique properties of carbon dioxide play an important role in the extraction technology. Carbon dioxide acts as a supercritical fluid above its critical temperature (31°C) and critical pressure (7.39 MPa). At this stage, carbon dioxide has a density of liquid but is diffusible as gas. SC-CO2 is a new technology in the world of extraction where it can overcome the short-comings of conventional distillation and extraction. 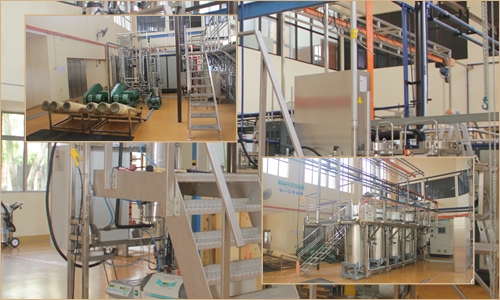 Available technology in the SFC